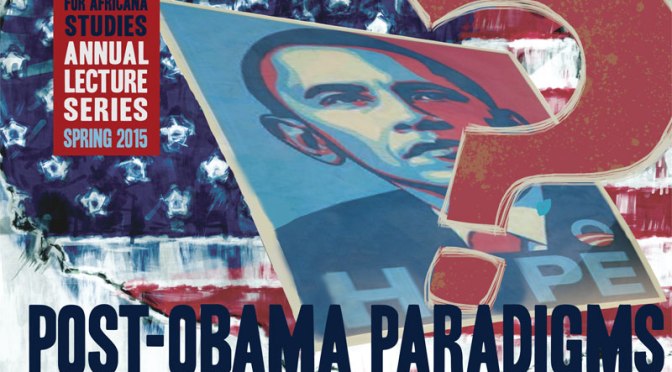 According to Charles Blow’s speech at Bucknell University, there are four main components the the Obama administration will be remembered for: foreign policy, Obamacare, Diversity advancements, and the publics reactions to these actions. While Blow is a staunch Obama supporter, his speech showed the downsides as well of the triumphs of Obama’s eight years in office.

Blow sees foreign policy as a blight on the administration. While citing sources of remembrances Blow juxtaposes the ending of Guantanamo with the heavy use of drone killings. By doing this he is able to point out just how overshadowed any positive policy changes would be in comparison to the blight of computerized killings.

Blow favors Obamacare. He sees upside in the vast amounts of people who now have free medical care and in the effect the Affordable Care Act has to lower medical costs. The one thing he fears in Obamacare is the possibility of repeal. There have already been multiple Supreme Court trials to justify the bill. There is currently a trial by seen be the Supreme Court trying to overturn the Act based on specific verbiage in the bill. “It is a battle of linguistics,” Blow states.

Obama has made significant strived towards Equality. He is the first sitting president to come out in favor of gay rights. His administration repealed the “Don’t Ask, Don’t Tell” Act. Under his administration, Gay Marriage has become legal in 37 states. Obama is the first president to say “lesbian, transexual, and bisexual” in a State of the Union Address. He has appointed more publicly gay officials than all other presidents combined. He has appointed two women to the Supreme Courts. Nearly all of his appointees have been a woman and/or a minority. All of these action are incredible steps forward, however they may be overshadowed by the reactions to Obama as president.

Blow started this section by stating, “Obama would’ve won without the black vote.” While 95% of blacks voted for Obama, Obama still would’ve had the majority without these votes. He then stated that, “all Democratic candidates since the 1940’s have received at least 80% of the black vote.” He points to actions made by LBJ and Nixon as historical reasons for black alliance with the Democratic Party. He states these facts to diminish claims that seek to undermine Obama’s power. He took this to relate to the animosity that lead to the Do-Nothing Congress, another blight on the Obama Administration.

Overall, I found Blow’s talk engaging and informative. I have been a huge fan of Blow for four years now and I felt that his demeanor while giving this talk was dignified as expected. He allowed facts to lead him to logical conclusions and effectively summarized the polarizing retactions to Obama’s eight years as president.

One thought on “The Obama Legacy: As Told by Charles Blow”