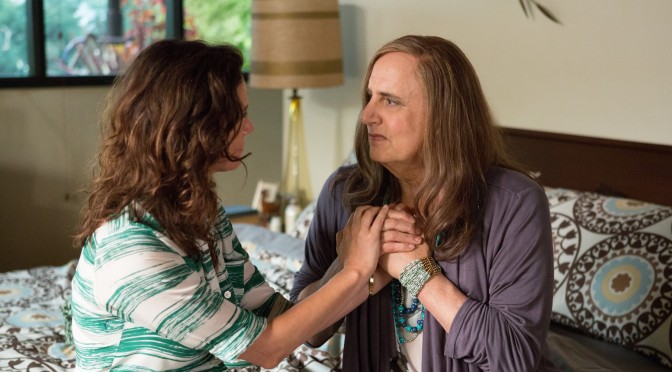 Transparent is the critically acclaimed television show from Amazon about a family whose seventy-year-old father (Jeffrey Tambor) reveals to world that he wants to be a woman. The show perfectly captures the Pfefferman family as the patriarch Mort/Maura transitions into a woman full-time. The eldest daughter Sarah is married with two small children and learns to be truthful with herself as she watches her father do the same. The middle child Josh is a record producer who works at understanding himself and attempts to take life more seriously. The youngest daughter Ali is an incredibly smart woman who can’t seem to figure her life out. The Pfefferman family as well as their respective loved ones and new friends work through everyone’s changes and make the effort to band together through their father’s transition. Having recently binged watched the television show, I can say that Transparent is an important show to watch.

Transparent is the work of creator Jill Soloway whose own father’s transition to become a woman inspired her to make this show. Jill Soloway is someone who possesses C. Wright Mills’ term sociological imagination. Soloway recognized that there was a problem at the individual level that people did not fully understand trans. She further realized that this was not an individual problem, but that it was a societal problem. In order to solve this problem, Soloway created Transparent to share the trans story with the world. Someone had to accept the responsibility to educate society. As we found in Mike Daisey’s situation, entertainment is often the most influential way to get people to care about something. Transparent is a fascinating story that gets the viewer to care about the Pfefferman’s, your average American family, not just the family with the trans father.

I applaud Soloway’s undertaking such a personal, delicate and important task. Transparent is not your average television show. The show has so many stakeholders who count on it to do so many things. The entire trans community relies on the show as an ambassador to the world. Families and friends rely on the show to help people understand and appreciate the sensitive nature of the subject. Additional stakeholders include the future generations of trans who will hopefully come out into a world that is much more understanding and accepting of them.

I also applaud Amazon’s risk-taking in producing the show. As a company who is working towards being considered a player in original programming, Amazon does not have an easy task in a market where so much of the mainstream original programming comes from such well-known and established content sources. I think Amazon realized that they could not fail with an important show like Transparent. Amazon had a show on their hands that was a fascinating story of a family that also had a much greater purpose than entertainment. I think this purpose and goal was realized as Transparent has achieved great success and won awards, including the Golden Globe award for best actor in a television series musical or comedy for Jeffrey Tambor and the Golden Globe award for best television series music or comedy.

4 thoughts on “Transparent: Not Just a Trans Parent”