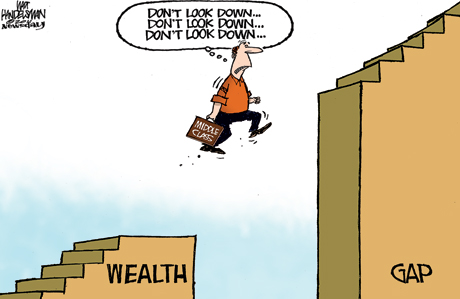 For almost 30 years after WWII, family incomes grew at a steady pace, doubling by 1973. Then, as a result of multiple economic factors, including “Reaganomics tax cuts,” the momentum shifted. Since then, real income has actually started to decline, with relative income inequality greater than any other point in American history, even when you factor in slavery. Income inequality is a rapidly growing concern in the American economy, and is only just starting to be discussed on a national political level. Our tax system currently helps the rich get richer while aiding the plight of the poor via middle class earnings. Our minimum wage has decreased in real value since 1968, and politicians are still reluctant to raise it. This remains true even as empirical and statistical data proves an increase will reduce income inequality, raise median income on a macro-economic level, and will not significantly impact employment levels. Meanwhile, corporations are taking advantage of a volatile and crowded labor market with ethically shaky hiring practices and no repercussions. They continue to pay CEOs and upper management lavish bonuses on top of generous salaries while largely ignoring production level workers. Pay ratios between executives and average workers have skyrocketed and show no indication of slowing down.

We are reaching a critical point in the wealth gap debate, and it is time for some sort of action to be taken. There are three easy steps that the government should take that can help deflate this issue before it threatens our national economy and society. The first is the simplest: raise the minimum wage. Even the lowest level earners of our economy should be able to make enough to maintain a standard of living that is at least above the poverty line. The second step is also simple and in progress: force companies to disclose pay ratios of top earners compared to average employees. It is time for public corporations to tell investors and the American public a story of their success which details the compensation and treatment of its average worker. Finally, policy makers must change the tax code to stop aiding the poor at the expense of the middle class. A progressive code that taxes consumption as opposed to labor, encourages savings, and limits unrestricted growth of generational wealth from the country’s top earners is one potential solution.